From heavy duty cable ties and stainless steel cable ties to cable tie guns and assorted packs of ties, we have all the accessories you could need in one place. Commonly used in industries including automotive, agriculture, computing and industrial, cable ties are an extremely versatile and durable temporary fixing with a relatively high tensile strength. Take a look at the full range of cable ties and accessories below and order online for the best prices guaranteed. 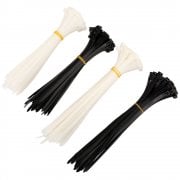 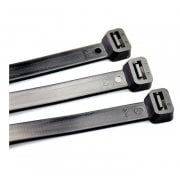 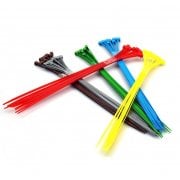 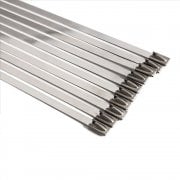 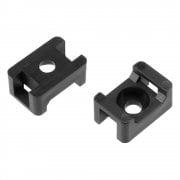 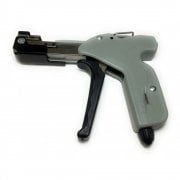 Standard cable ties - This type of cable tie is a one-piece, self-locking fastener. They're normally considered as single-use and can handle bundling requirements and tensile loop strength from 8 to 144kg. Standard cable ties exist in a wide variety of colours, and the width of the ties can also vary.

Mounting head cable ties - Mounted head cable ties are designed to incorporate a mounting hole. Mount allows the cable tie to fasten by a screw, so it can be fixed to a vehicle chassis, panel or wall. Mounting-head cable ties can be used for bundle strengths of between 20 and 60kg. Standard colours are normally black or natural nylon.

Push mount cable ties - Push mount cable ties to have a built-in mounting device which can allow cables to be attached to a panel or chassis without any additional fixings. The mount part of the tie is easily inserted into a pre-drilled hole and locks into place. Arrow nose, drive rivet, and blind hole stud cable ties are available.

Double-headed cable ties - These cable ties are ideal for running two parallel cables that need to be separated. They allow a second cable runs to install without the need for additional cable ties.

Reusable cable ties - also referred to as releasable. The majority of reusable cable ties use a trigger release while some of them use pawl release. The trigger release mechanism holds everything together tightly and only releases with a human touch. The pawl release button is part of the head ratchet and can release by pressing the pawl handle down to release the ratchet from the tie so they tail can easily be taken off.